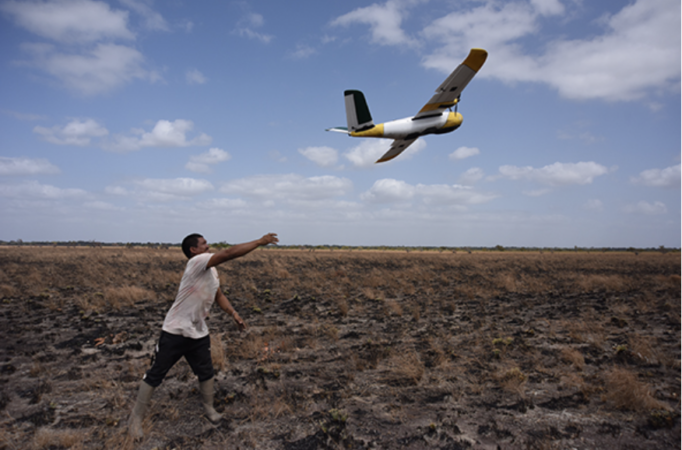 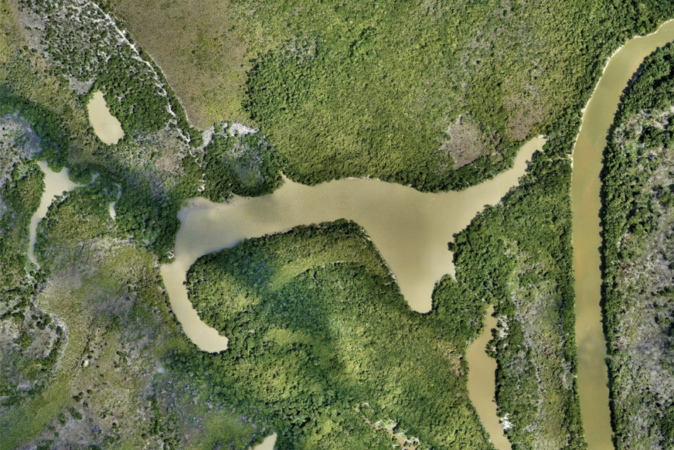 The North Rupununi Wetlands are situated in the southern interior of Guyana, South America, and support a high terrestrial and freshwater biodiversity. Biodiversity surveys have identified more than 450 fish species, which in turn supply a food chain to endangered species such as the black caiman (Melanosuchus niger), giant river otter (Pteronura brasiliensis), giant river turtle (Podocnemis expansa), and recovering populations of the largest freshwater fish in the world, the arapaima (Arapaima spp.). These species are not only important for conservation but also supply local people with a range of livelihood activities, including subsistence fishing and ecotourism. There is increasing evidence that the high fish biodiversity of the North Rupununi Wetlands is in part a result of a hydrological link between the Amazon and Essequibo basins, allowing species from both basins to intermingle in this region. The North Rupununi Wetlands are characterised by low topography and seasonal flooding of this watershed divide, thus allowing the migration of aquatic species, including arapaima and black caiman, which are found in no other watershed of Guyana. However, the precise location of these connectivity and migration corridors have not been studied to date.

There is economic pressure in Guyana for natural-resource exploitation and foreign pressure to convert natural habitats into industrial farms, logging, mining and oil wells, and associated infrastructure, especially access roads. This increased activity is having an impact on the North Rupununi Wetlands in terms of pollution, over-harvesting, irresponsible hunting, and unregulated or poorly regulated mining and logging that are resulting in the loss of species in general and habitat connectivity in particular. This has the potential to further deteriorate sustainable traditional livelihoods, already under pressure from globalization and the market economy, forcing many more Indigenous people to migrate to towns and cities in search of often poorly paid work.

Following on from an earlier project this project carried out higher resolution drone mapping of the hydrological link between the Amazon and Essequibo basins and used satellite radar imagery analysis to determine the hydrological dynamics of flooding. Our work also produced detailed vegetation, elevation and hydrological maps, which can support decision-making with regards to existing and proposed developments.

This information will support Guyanese conservation organizations, Indigenous communities and government policy makers in their quest for the sustainable management of the North Rupununi Wetlands.