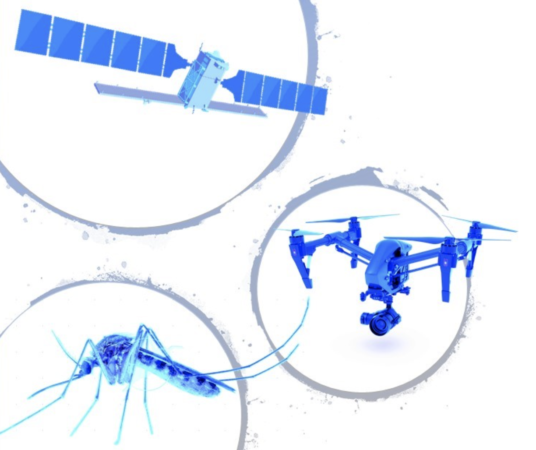 Mosquito-borne diseases have a major impact on developing countries. In 2018, there were an estimated 228 million cases and 405,000 deaths from malaria alone. The DETECT project aims to enable communities affected by malaria to have satellite, air-borne and ground-based environmental data at their fingertips, so that they can identify where mosquitoes are most likely to breed. The project will then enable communities to deploy ‘sprayer drones’ to these high-risk areas to release biocontrol agents which kill the mosquito larvae without affecting other species.

This project will co-design the community-based service with the Indigenous community of Yupukari, Guyana, and engage stakeholders from within Guyana and beyond in planning for outscaling. The project is a partnership between the Cobra Collective and commercial enterprises (Blue Bear Systems, 2iC, BrainStreet Group), NGOs (Iwokrama, North Rupununi District Development Board), academic institutions (The Open University, University of Guyana, Stirling University and University of Aberystwyth) and the Commonwealth Centre for Digital Health.

The project began with a ‘Discovery Phase’ on 1st August 2020 and will last until March 31st 2021. The aim of this phase is to co-design and pilot the system and then plan for the ‘Operational Phase’, which, if funded, would last for up to 4 years.