The Covid-19 crisis has forced many people to stay at home and work remotely. But what are the pros and cons of remote working in participatory video projects where face-to-face communication is extremely important? Is it still possible to involve and train groups coming from disadvantaged backgrounds remotely? What strategies and methodologies can be put in place to make sure that the participatory process is still inclusive?

A good learning experience came from the UN Women Second Chance project in which the Cobra Collective led the participatory video process across six countries – India, Cameroon, Mexico, Chile, Jordan and Australia –  to co-create a video course on “Life and career planning” aimed at women who have missed traditional education and need new training opportunities to help them find an income and fit their aspirations.

The initial plan was that Cobra Collective facilitators would spend 3 weeks in each country to work directly with disadvantaged women and co-create the course through intensive participatory video training. They would work with staff from ‘implementing partners,’key organisations in each country; these local facilitators have extensive knowledge of the context and a trusted relationship with the local women “beneficiaries”, as they regularly conduct activities and projects to implement the UN Women Second Chance program in their countries.

However,  due to the global pandemic, travel was not possible, so we decided to put in place a plan B with all activities to be carried out remotely. The first question we had to answer was, would it still be possible to work remotely with the beneficiary women or was another approach needed? After several meetings with UN Women and the representatives of the 6 country organisations, we understood that working remotely with the beneficiary women would be challenging:

As a result, we decided to go for a “train the trainer” approach. We ran an intensive 5-month online course on participatory video with the local facilitators in each country, so they could transfer their knowledge to the local women by working face-to-face with them and together realise the video course. 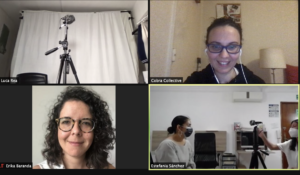 We supervised and supported the 6 groups during the whole process of scripting, planning and production of the video courses with weekly zoom video calls and communications through Whatsapp groups. We used a “learning by doing” approach, and we shared the mistakes and successes of the different groups so they could learn from each other.

The training covered a wide range of topics such as how to encourage disadvantaged women in producing a video course, the importance of collecting consent, and more technical aspects such as how to present in front of the camera and conduct interviews, and how to shoot videos using a simple kit of a tablet, microphone and tripod.

The process was time consuming for all project participants, and as facilitators of the whole process, we had to work extra hours, and sometimes late nights or early mornings due to the very different time zones. In addition, explaining technical aspects through a screen, such as how to plug in a microphone, was not straightforward, and became even more complicated as we had to use different equipment brands and models due to the lack of items in local markets.

However, despite the difficulties, the local facilitators put a lot of effort, commitment and enthusiasm in learning how to use participatory video and the results were great. As Penny Holzman, UN Women Geneva team E learning content expert stated “ the need for remote working meant that local facilitators really had to shoulder responsibility for filming and interviewing, so the skills they developed were on a different level to what they would have been if the original methodology had been used.  So I think that the capacity building element benefited from the no travel scenario”.

Scripts for the course videos were first drafted by academics from The Open University (UK). However, the local facilitators in each country adapted the contents, the language and the examples to the local context, co-working with us on an online document and via video calls to discuss and share ideas. How to use digital sharing platforms in the best way was part of our 5-month training. Estefania Sanchez, a local facilitator from Mexico underlined the importance of this phase of the project “There are things that you can’t understand if you are not in Mexico.  So the script adaptation step was necessary!”

But have the beneficiary women been involved in the script adaptation as well? Unfortunately, we did not have enough time to train the trainers in this particular aspect. Consequently, the local facilitators had not adequate experience and time to involve more of the beneficiary women in this part of the process. Nevertheless, through this project we have learned that the “train the trainers” approach can be very effective by remote working as well. It is crucial, however, to consider the extra time needed to cover all aspects of the participatory video process. 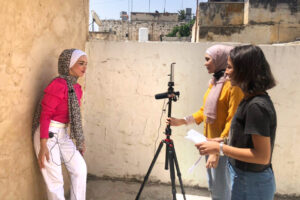 The skills transferred and the involvement of the beneficiary women varied from country to country, according to the context and the Covid restrictions. In Jordan, for example, some beneficiary women supported the local facilitators in shooting the videos and could gain some technical skills in participatory video techniques too. In other countries, like Mexico and India, some beneficiaries were involved in the video course as teachers of the course, presenting the course content on the videos, a role that was predominantly done by  the local facilitators in each country.

In all countries, the second part of script development was completely led by the beneficiary women, as it was collected through interviews where the women decided how to share their stories and what to say to inspire other women. This could be considerate as part of an open script adaptation. Cha Nyincho Jevis, a local facilitator from Cameroon said “ It was a great idea to involve facilitators and local women as the main characters introducing the videos . This gave the beneficiaries a certain level of courage and importance and will give other women confidence boosting ideas.  They will think if other women can sit down and share their experience, why can I not do the same thing?”.  Ana Montes, a beneficiary woman from Mexico that was involved in the project said “I think that with my experience I can inspire many women around the world to acknowledge their capacities and achieve their goals!”

In an in-person scenario,body language and human interaction helps to connect empathetically in a more direct and fast way. This would have created the ideal conditions to work in a participatory project and to get the best results. However,  in our case, this issue was mitigated by the intensive use of Whatsapp and video calls, a medium that nowadays is very much consolidated everywhere. On the other hand, the long term relationships that were built thanks to many months of online training, rather than three face-to-face weeks, have helped to create trust and friendships that are still alive today. Creating a network of like-minded people that share your same ideals and goals is very important to create social change.

Finally, thanks to the experience coming from this project and the difficulties emerging from the Covid-19 crisis, new creative opportunities have been opened in the use of participatory video approaches.