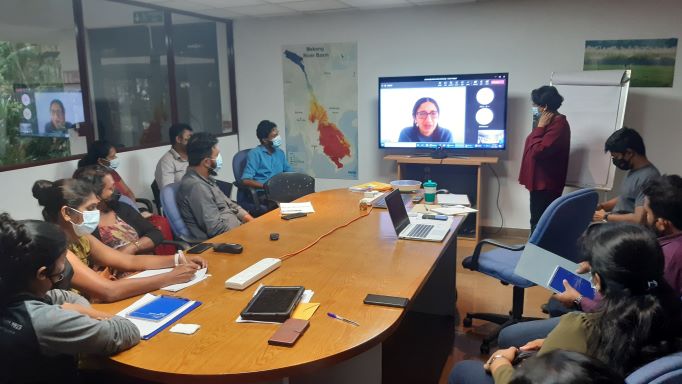 On the 13th December 2022, together with the International Water Management Institute (IWMI), Colombo, we convened a workshop with the community researchers currently exploring the challenges and best practices in their wetlands sites. As part of the ‘Increasing the resilience of biodiversity and livelihoods in Colombo’s wetlands’ project, community researchers have been working in the Kolonnawa, Kottawa, Beddagana and Madiwela wetlands (jointly with site managers), understanding the history, context and current issues affecting the wetlands, from an ecological and social aspect. They have been interacting with community members, but also local businesses, school children and government agencies in their work.

The aim of the workshop was to share experiences of the participatory video process so far and plan the second iterations of their videos.

After screening each video, each community team were asked to reflect on the research process of the participatory video, and especially:

What followed was a rich discussion that highlighted a lack of awareness of wetlands (including its boundaries) and some people’s hesitancy to participate and ways in which this was overcome. The workshop also showed how both the community researchers themselves and wider community members were learning about the wetlands through the participatory video process. The researchers also talked about how they were learning to work with communities, adjust to situations and people, and how to change the negative attitudes of people about the wetlands.

The workshop ended with feedback on the videos and planning for a second iteration of the participatory video process. This will also involve screenings back to the wider community in each site to gather views and feedback.

We look forward to see the final videos early in 2023!