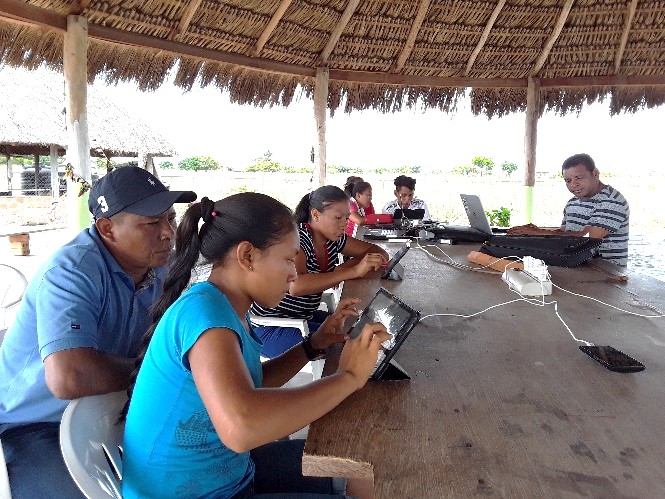 Continuing our trip, we moved from Maruranau to Parikwarunawa. Just after concluding the video screening, the team began packing to make an early departure the next day. Sigh! But it was not time for home and more so Christmas yet! But it was on my mind as we packed. We left on the 11th December for the next village clear back across the savanna to the south central district of the Rupununi. Close to Lethem that you could almost touch it.

The bus left the village at 6:30 am and we headed back through the wide savannas. This time our trip was shorter and more scenic because we went through Shea and the driver used the graded road. We arrived to our second destination where we spent another 8 days in the small village. When we arrived, we were greeted by the Deputy Toshao Ivan Peters.

Parikwarunawa, we found was very quiet and very breezy and it has a very close view of the Kanuku Mountains. We felt a bit lonely in this beautiful village for some reason. What was it? Was it the Christmas feelings which we were ignoring to focus and enjoy the traditional knowledge mood? Or was it just being in the wide open savanna with few people around to interact with outside of our work.  OH! Oh! We still had 8 days to ignore the feelings for Christmas…

The very day we held the village meeting and workshop Mr. Neville Adolph, the new community liaison representative from the Kanuku Mountain Community Representative Group joined the team. Neville was to be the link between the communities, the project and his organisation. He has some experience in video making, thus he was able to assist the team during the training while learning what is was that we do.

The meeting and the workshop went well! What we did observe in this community was that people rarely spoke their native language and those who did it were not fluent. The youths could not have said a sentence in Wapishana, though they understood it when it was being spoken. It was such a vast difference from Maruranau.

We had 7 days of trainings to be done with the 7 identified young people. These young people seemed very quiet but yet smart and were interested in learning. We all enjoyed the training, and the village members were supportive and were willing to continue supporting project activities in the village.

At the end of the training, three youths out of the seven were recommended to continue as community researchers on the Darwin Initiative project.

During the training, the trainees’ loved doing energisers and ice-breakers. They had us as facilitators busting our brains to find games they could play that would re-enforce some of the things we were trying to get across. To demonstrate to the community the type of training they were receiving, the trainees were able to put together three short videos featuring: The History of Parikwarunawa, The Making of Parakari and Traditional Fishing.

On the final day in the village, we organised a screening with the village members including elders, parents, youths and children. The trainees were given the opportunity to lead the screening so to have them speak and feel comfortable with their own people. In addition to the three videos, we screened other videos from the North Rupununi villages.

The very next day, the team left with ease from the traditional knowledge works for the holidays. While we were there we looked for Christmas but it took some time getting here. Not even in Lethem was it to be found as much as we would have liked but as we got nearer to home there was a sense of anticipation. We were all going to be with our children, family and friends. We would have food and drinks and enjoy that time together as come the New Year we will be back on the road travelling through that vast savanna to get back to Maruranau and Parikwarunawa!

Grace Albert has 5 years’ experience in community development and visual methodologies. She speaks fluent Makushi and English, and has strong skills in community facilitation and engagement, visual methods, and her local Makushi traditions. Following a strong grounding in further education courses of natural resource management, wildlife management, agriculture , information technology, leadership and culture, she has worked for the North Rupununi District Development Board (NRDDB), a local Indigenous community-based organization, in several roles. This includes as a radio broadcaster, a community film maker and most recently as a Community Research Assistant. With these experiences, Grace hopes to remain as a resource person for her community and is committed towards development of her homeland.