After a long delay due to Covid-19, a national consultation process for a draft Traditional Knowledge National Action Plan (TKNAP) for Guyana began on the 12th February 2021. The consultation with Indigenous communities in Guyana is supported by the Ministry of Amerindian Affairs (MoAA).  A first consultation meeting was held with all the Community Development Officers (CDOs) who support the work of the Ministry of Amerindian Affairs. They are field-based and have responsibility for clusters of hinterland communities in the regions to which they themselves reside. 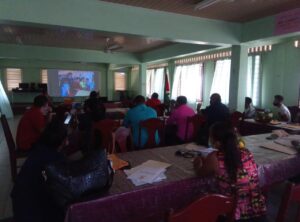 With the CDOs working in groups, they considered each action proposed under each of the three (3) objectives of the TKNAP and provided comments using a feedback form. Discussion during this period saw some CDOs expressing their support for many of the actions. Some commented that they were happy to see specific actions that would address: the need for increased awareness of the rights of Indigenous peoples, opportunities that would facilitate the continued use and safeguarding of traditional knowledge, and empowering Indigenous youth to be more knowledgeable and involved in maintaining their culture and practices. 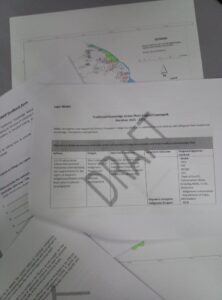 These CDOs will now support the delivery of packages with over one hundred communities, covering all ten (10) Administrative Regions and each of the nine (9) Indigenous nations of Guyana, in efforts to receive feedback on the actions being proposed in the draft TKNAP. In addition, in the coming month, with the continued support of these CDOs within the MoAA, visits to several regions to engage some of these Indigenous communities directly will being undertaken with necessary COVID-19 precautions. We hope to hear from the many voices around Guyana on the TKNAP in its journey towards policy status.

Deirdre Jafferally has 17 years’ experience working in community based wildlife management and conservation. Deirdre first started working at the Iwokrama International Centre for Rainforest Conservation and Development, Guyana in the area of environmental monitoring. Recently, Deirdre has focused her interest in community resource management and Indigenous knowledge in the pursuit of a PhD exploring the implications of socio-ecological changes on Indigenous knowledge and practices, and its impact on forest conservation. She holds a BSc in Biology and MES in Sustainable Development and Ecological Monitoring.