Since 2017, the Cobra Collective has been working with members of the Rupununi Wildlife Research Unit to map the precise location of the hydrological link between the Amazon and Essequibo basins – one of only two places in South America where the waters from the Amazon basin mix with waters from another watershed. This mixing of waters occurs in the Rupununi Wetlands of Guyana, enabling the development of one of the most aquatically biodiverse regions in the world, with over 400 fish species identified so far. The mapping will help support appropriate development and conservation of these biodiverse rich wetlands, while at the same time provide a new insight into South American aquatic biogeography.

The project engages with traditional ecological knowledge, high resolution drone mapping, remote sensing analysis, participatory video, and ground-based hydro-ecological surveys. This will enable the identification of the physical characteristics that allow the waters of the Amazon and Essequibo basins to meet, map the distribution of vulnerable wetland habitats, and present the knowledge and views of Indigenous communities.

In collaboration with 3DXR, one of the UK’s most innovative drone development and manufacturing enterprises, we have developed and deployed a low-cost, long-range, fixed-wing drone which is able to fly autonomously for up to 2 hours and over 100 km while taking over 1000 high-resolution images per mission. In February 2020, Cobra Collective members (Andrea Berardi and Matt Simpson) worked with Rupununi Wildlife Research Unit members (Anthony Roberts, Felix Holden, Kamal Khan) to fly a record 36 missions in two weeks, collecting over 37,000 images. But, the drone surveys were not without challenges as a result of the extreme environmental conditions. 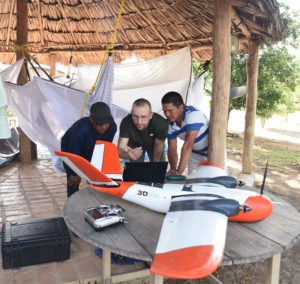 The team had to contend with high temperatures, strong winds, a dusty environment, occasional rain showers, and very rough landing sites. We knew that our drones would be severely tested, so we prepared three drones in the UK, and travelled with plenty of spare parts. We did experience one catastrophic crash which put one drone out of action, and encountered many more minor incidents that required constant repairs to the other two drones. However, the Indigenous team members demonstrated a fantastic ability to identify where the problems were, and how to fix them. By the end of the fieldwork, it was the Indigenous team members that were singlehandedly assembling the drones, launching them, and repairing any minor faults. 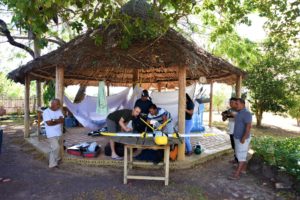 These images are now being analysed to produce extremely high-quality maps (5 cm ground resolution) of the habitat and elevation of 144 square kilometres of the most significant areas of the Rupununi Wetlands. These highly accurate and timely maps will be used to inform landscape management in the region.

The Cobra Collective is now looking forward to building further capacity in drone surveying, construction and maintenance in order to establish an autonomous Indigenous drone survey unit in Guyana that can support environmental monitoring within the Rupununi Wetlands and beyond.

This research has been generously supported by The Woodspring Trust, WWF-Guianas, and The Open University.